Testnet Release Date: Aug 22nd, 2021. Expected on Mainnet by  Sep 22nd, 2021 With this release, we will establish the foundation of the Bitfari network: Community ads. Neruda will bring all of the Bitfari apps to light, screen projectors, wallets, explorer ads, publishing systems, and datamarts. Beta testers will be able to use the FARI token to make purchases in the system, receive rewards and broadcast their messages in the form of ads and other types of communication.

This release will introduce users to Bitfari and give them a taste of the system. They will experience BitfariDAO – our decentralized governance system, experiment with their shopping and interest lists and create global movements by leveraging common grounds.

Bitfari’s community network is named in honor of Pablo Neruda, the greatest poet of the American Continent. Pablo Neruda was a Chilean poet-diplomat and politician known for his broad poetic range and powerful verses. The Colombian novelist Gabriel García Márquez once called him “the greatest poet of the 20th century in any language”, and the critic Harold Bloom included Neruda as one of the writers central to the Western tradition in his book The Western Canon. Neruda won the Nobel Prize for Literature in 1971. More about Pablo Neruda

Testnet Release Date: Nov 22nd, 2021. Expected on Mainnet by  Dec 22nd, 2021 With this release, we will establish the foundation of agency networks and apps. For the first time, agencies from around the globe will be able to join Bitfari and post contextual, programmable ads. This will represent a major win for the advertising industry but also for freedom of expression. You see, with contextual ads, advertisers and common folks will be able to place ads using microtargeting, lowering their costs into fractions of cents until a match arrives. This revolution will likely result in companies creating programmatic ads for a substantial fraction of their inventories. People will see better ads, and companies will save a lot of money.

By the same token, social causes, movements, and concerned parties will be able to advertise programmatically, making their messages reach further for less. Agency creation will be open to everyone and we hope that independent creators will seize the opportunity to advertise and grow the Bitfari platform to benefit their customer base.

The Parra release will also feature the inclusion of apps that create impromptu ambient networks of identified and pseudonymous actors to remove frictions for local commerce. Such apps will include automatic signage translation to the native language of the user, digital document distribution based on geolocation, geo-mail, local forums, and chats, hyper-graffiti, geo-stories, etc.

Bitfari is very proud to recognize Nicanor Parra by naming contextually distributed and programmable ads as “Parra Ads”. Nicanor Parra was one of the most influential poets in the Spanish language of the 20th century. He was a poet, mathematician, and physicist. He was proposed on four occasions for the Nobel Prize in Literature. On 1 December 2011, Parra won the Spanish Ministry of Culture’s Cervantes Prize, the most important literary prize in the Spanish-speaking world. More about Nicanor Parra 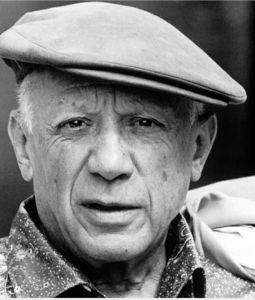 Testnet Release Date: Feb 22nd, 2022 Expected on Mainnet by  March 22nd, 2022 In this release, Bitfari will popularize a new medium of advertisement: the AR Billboard. Advertisers, small businesses, and consumers will be able to zone, create, and popular “Augmented Reality Billboards” rivaling the size of the Empire State. As Picasso created cubism to highlight the soul of his subjects by injecting them with movement, Bitfari will release experimental technology projecting ads on windshields equipped with smart glass and will also integrate the solution with personal AR devices and smartphones.  Billboards will be created and sold on the Bitfari platform and will be contextual and programmable from day 1. In honor of this great artist, Bitfari AR Billboards will be known and sold as “Picasso Billboards”.

Picasso needs no introduction, regarded as one of the most influential artists of the 20th century, he is known for co-founding the Cubist movement, the invention of the constructed sculpture, the co-invention of collage, and for the wide variety of styles that he helped develop and explore. Exceptionally prolific throughout the course of his long life, Picasso achieved universal renown and immense fortune for his revolutionary artistic accomplishments and became one of the best-known figures in 20th-century art. More about Pablo Picasso

Testnet Release Date: May 23nd, 2022. The details for this release will be shared later this year, but yes, as people are gossiping, this is the Bitfari release focused on web advertising and online content monetization.